What I am about to admit upsets me. First of all, I’m a hypocrite (that’s not what upsets me – I’m fine with that). I spend a good deal of my time with the Food Network on in the background. I’m sort of sad that I’m missing the Next Food Network Star auditions in town next week, not that I’d really do it, but, I mean, maybe I would. And I have watched all three seasons of the Great Food Truck Race even though it really is quite boring and formulaic. What I don’t do, is make food from the Food Network Magazine. I just don’t.

Except I did. Twice. This week alone. And I feel ashamed.

It’s not that I don’t believe that they know how to make food – it’s in the name of the magazine for heaven’s sake – it’s just that I like to think of myself as someone with a slightly more refined palate and sense of adventure than a Food Network Magazine kind of person. Evidently I’m not.

I’m just like everyone else. I struggle to find new things to cook and sometimes I don’t want to have to buy 29 new ingredients to keep in my ridiculously small pantry in case we decide to try the cover recipe on Bon Appetit. Sometimes I don’t feel like poaching whole fishes and hand-making pasta. Sometimes I just want to throw some boneless, skinless chicken in a pot and have it turn into something that I can pour over some potatoes or noodles. And that’s just what I did. As Usher Raymond IV would say, “these are my confessions.”

Prior to seeing this recipe I had never even heard of chicken paprikash. Immediately, I mentally lumped in it with goulash, given that there are things like noodles, sour cream and paprika in it and it has a slightly eastern European sound to it. It ended up being pretty tasty and might have been even better the next day. Like a haircut.

Let’s get started. Heat a large skillet (that has a lid) over medium heat and begin sautéing your bacon (don’t use the lid now though). While that’s going down, dice your pepper and onion and have at the ready.

Ok, go ahead and grab a large bowl and add the flour, paprika, marjoram and some salt and pepper. Toss the chicken thighs (feel free to use breasts if you prefer. I don’t judge.) in the mixture until everyone is nicely coated.

Once your bacon has begun to brown, add the pepper and onion to the pot and cook for 2-3 minutes.

Things got weird here. I think this could go one of two ways. You could pull out the bacon, pepper and onion mixture and then brown your chicken, or you can push the stuff to the side and cram the chicken in there (which I did). Somehow it all fit, but it wasn’t really necessary. Also, be sure to add the rest of the flour and paprika mixture from the bowl to the pot. You’ll want that to thicken things up. I forgot that part so later on in the game I ended up putting 2 tablespoons of flour in a Pyrex measuring cup and adding some of the hot chicken stock to it and whisking the lumps away. I added that back to the sauce to get things a bit thicker. It helped. 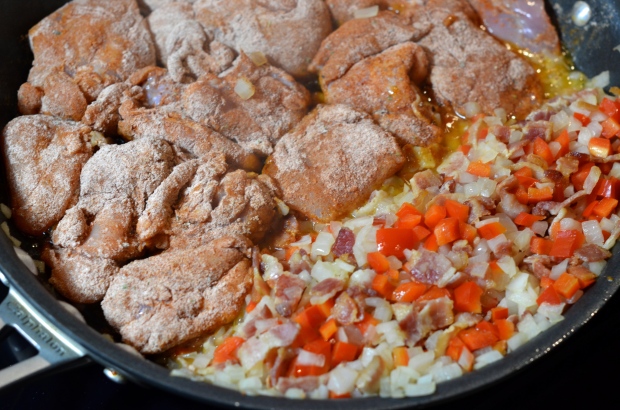 Flip yo’ chicken, yo. 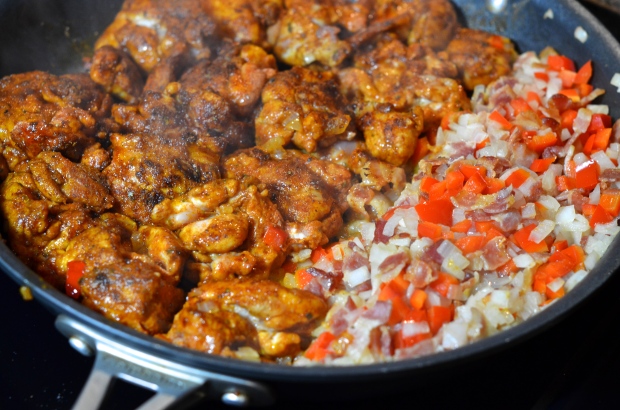 When everybody is nicely browned, stir it all together and then add the chicken stock and bring to a boil. Reduce the heat to low, cover and simmer for about 10 minutes until the chicken is cooked through and things thicken up. While that’s happening, cook your egg noodles.

When the noodles have cooked and the sauce has simmered, it’s time for the final touch. Uncover the dish, crank up the heat to high and cook another two minutes. If things look thin to you, now is the time to do the aforementioned flour trick. Bring the heat back to low and stir in the sour cream and parsley. Cook another two minutes or so. 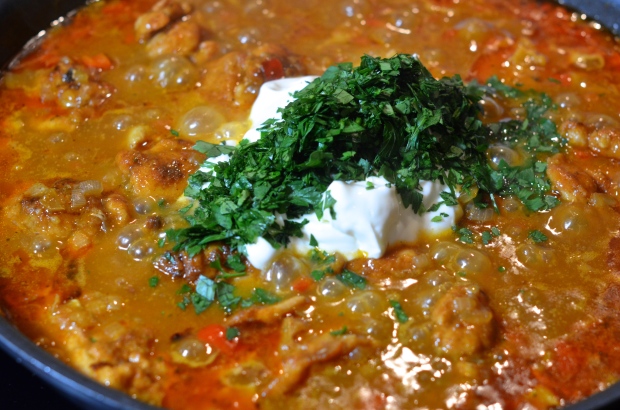 As expected, ladle this over the hot egg noodles and serve. I love egg noodles. I really do. We NEVER had them growing up but that may only be because I told mom I hated beef stroganoff. Digression. 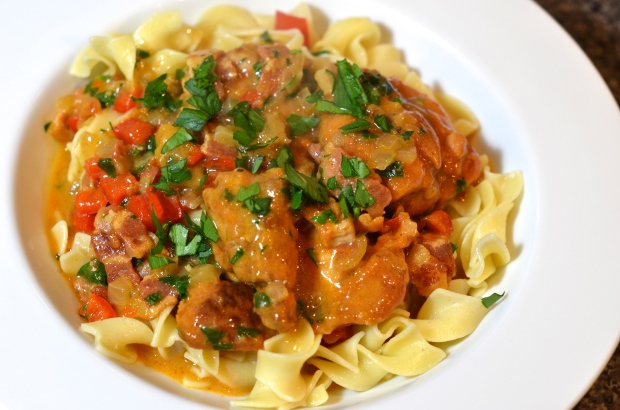 In honor of the EU winning the Nobel Peace Prize*, I give you what I assume is Hungarian chicken paprikash. I encourage you to enjoy it shamelessly.

*Has society really run out of quality people that we are now awarding the peace prize to entire continents?