I have some very vivid food memories under my belt – moments where I remember eating something for the first time. And not just because so often it was a traumatic experience (those have been repressed and surface from time to time with extensive hypnotherapy) but instead because I lamented that I had been living so long without something so fantastic. These include but aren’t limited to: perfectly cooked rabbit (Bourgogne, France – 2005), goat (Pura Vida, Atlanta, 2006) and of course, falafel (L’As du Falafel, Paris, France – 2005).

I had been living in Paris for nearly three months and had finally begun to solidify a few friendships that remain strong despite continental divides and shallow pockets. On a terrifically gray, damp-but-slightly-warmer day near Christmastime, my new friend and I decided to spend a Saturday in the Marais where I lived, knocking out some shopping and stopping off here and there for un verre de vin rouge and lunch. My companion, whose name rolls off the tongue in French – Na-Ta-SHA – and I (whose name sounds like a Incan curse or a skin rash when pronounced en français – Muh-Lee) strolled down le rue des Rosiers, a street known for its longstanding Jewish heritage and the cuisine to corroborate that reputation. Being from New York, Natasha had certainly enjoyed her fair share of falafel, but I, on the other hand, was new to this treat. We dined in – something I would realize later is absolutely unnecessary – and I worked my way through what seemed like 6-7 lbs. of chickpeas, pita, eggplant, carrots, tahini dressing, hummus and cucumbers until finally giving in.

My maiden voyage into the world of falafel had been a great success and my love of the deep-fried nuggets had begun. For the remaining year I spent in Paris, I would eat falafel at least once a week – two, depending on the hangover quotient. My other dear friend and Paris Life Partner introduced me to Chez H’anna, which, in my estimation, remains the best falafel in Paris, and together we would scout out a cheap bottle of water at a nearby bodega, head to rue des Rosiers for un falafel sans aubergines and meander to the tiny park around the corner to sit, eat, watch strangers’ children at play and inhale second-hand smoke. The perfect Parisian après-midi. Just check out that harissa-stained pita in the pedi park below. 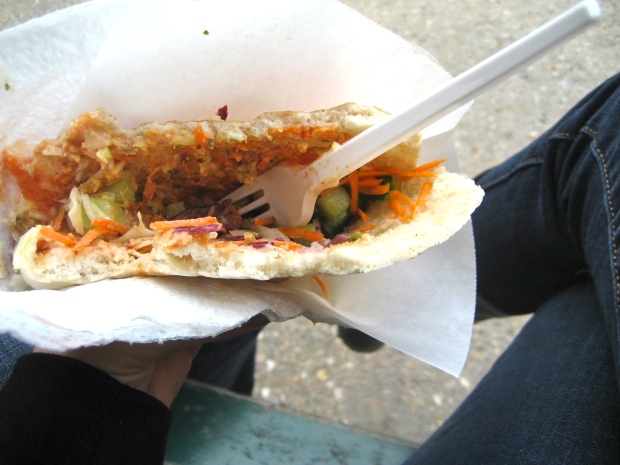 So, it is with much build up that I share this recipe for a food so dear to me. And let me just tell you: it is by no means anywhere near as delicious as what I ate in the photo above. Even if I were in a park in Paris eating it (which certainly is at play in the mystique) it still wouldn’t be as good. BUT – it is the best falafel I’ve made at home, it will kill you less quickly, and it may suffice in a pinch before you can hop a flight to CDG, take the RER B into Châtelet, switch to the 1, get off at St. Paul and head north.

I have made falafel before where you soak the chickpeas but don’t cook them and read a bunch of falafel recipes where you cook the garbanzo beans for 45 minutes before you make the patties and I decided to split the difference. I thought the first batch was too dry but that 45 minutes of cooking could make mushpatties, so I recommend 20.

Drop the chickpeas in a large pot with the bay leaves, cardamom pods if you have them in your home, 1 teaspoon cayenne pepper, 1 clove of peeled garlic and some salt. Cover with water and bring to a boil. Reduce to a simmer and let them party for 20 minutes and then drain. 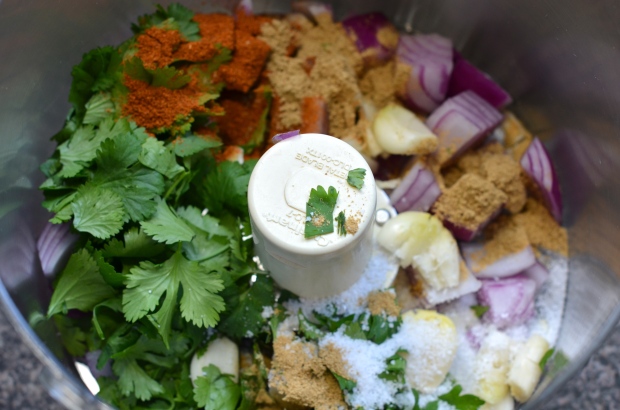 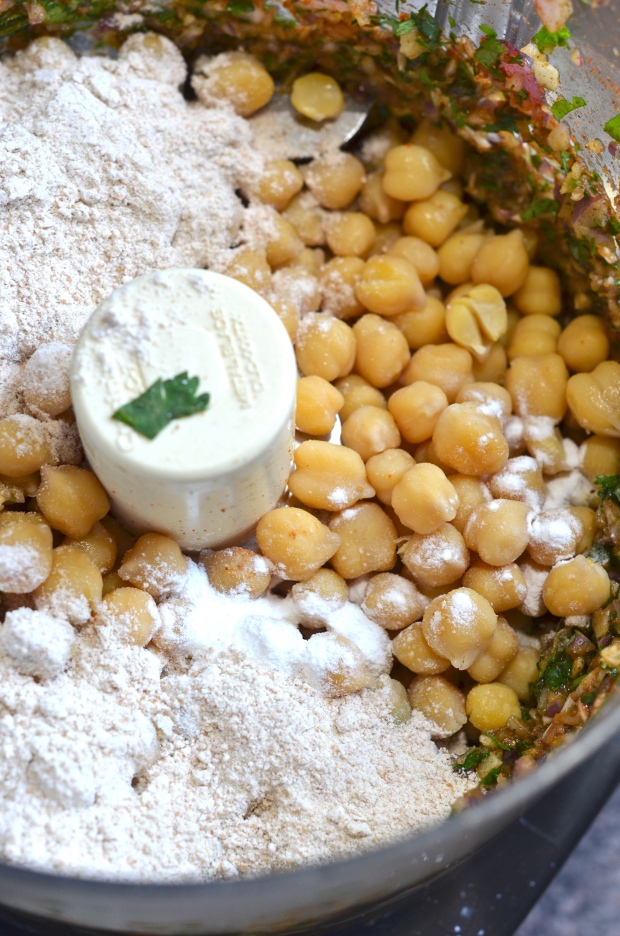 Pulse the mixture until it just begins to come together and things are a nice consistency. You don’t want to have it puree because then you’ll have textureless chickpea mush. Transfer the falafel mixture into a bowl, cover with plastic wrap and refrigerate for at least an hour. I’m guessing overnight is cool too. Why the hell not?

When it’s time to make your patties, preheat your oven to 400°F and grab a sheet pan. Grease that sucker up and get your trusty ice-cream scoop slash cookie dough baller slash falafel portioner. 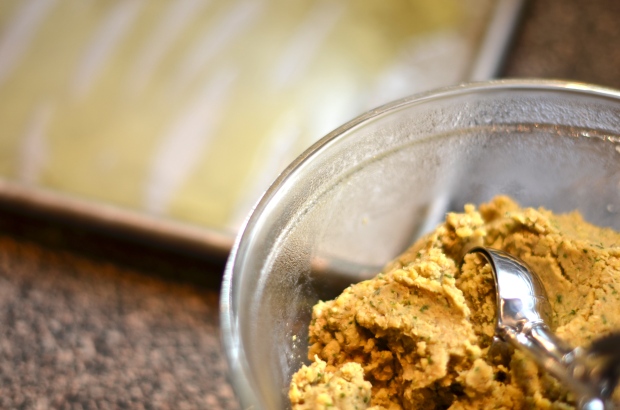 Use that to get equal amounts of chickpea mixture but do not use it to cram in a bunch of falafel-base into a ball shape. You want the falafel to be light and fluffy, not dense and compressed. As you can see here, I bake the falafel rather than fry it. This is for reasons that really have nothing to do with health but mostly because I can’t stand having my house smell like deep-fry. I imagine it’s what Paula Deen’s hair must always smell like. Portion out nice little falafels and stick on your tray. Spray or brush with olive oil and pop in the oven.

Bake for 20 minutes, flip the suckers and do it again until both sides are a nice crunchy brown.

From here, it’s all up to you. I served these with things you can find all over this blog: tabbouleh, tzatziki sauce, hummus, feta and tahini sauce (just tahini, lemon juice, water and olive oil). If I hadn’t run out of cukes and tomatoes, I would have put those in there too. Do your thing.

Like I said – it’s not as good – but if you can find an accordion and a short-tempered Jewish man flinging pita, then it’s damn close.