Well, I might be inviting a law suit with this post but how else am I going to be able to share a recipe with you while also referencing a topical news item and expressing my personal beliefs on “the man”? (I think “the man” should relax about his chicken/cows but also continue to create adorable ad campaigns and share his tasty diet lemonade with me). Everybody wins.

This recipe is one that was originally meatless but with most things in our house, we found sausage to be a welcomed addition to pasta with lentils, kale and onions. My lovely friend Laney served this to me in her home when I descended upon her one afternoon and I loved it and as such have brought it back to my house to recreate several times.

I used to be afraid of kale but in the last year or so have learned to embrace it. I don’t know why I was hesitant, I’m a strong supporter of its friends the collard and turnip green but for some reason found kale to be confusing at best. It’s bitter, can be tough and looks more like a decorative lawn-cabbage than a foodstuff, but with some counseling and soul-searching we’ve come to terms with one another and now I eat (more) kale.

This is a simple recipe but that involves a bit of prep to get things ready for assembly. I used more pans last night than I wanted but in the end it was totally worth it. The sausage we used was leftover in our freezer from our trip to Striplings in the fall and I actually already had some caramelized onions on hand from a pizza on Saturday night (but I made more because they’re so good). The lentils live in my pantry and stand at the ready at all times and so basically all we had to grab was some kale and pasta from the store.

Since you’ll be using several of these pots and cooking liquids and pans again, I want to give you an overview of what happens so you can get on board early on:

First things first, caramelized onions take a while so get those going. Slice your onions up and put them in a pan over low heat with a bit of olive oil and a generous hit of kosher salt. Cover the onions for the first 15-20 minutes to get them all sweaty and then uncover and let cook for another 45 minutes or so until they are a deep golden color and as sweet as candy.

While those are cooking, go ahead and heat up a large skillet to brown up the sausage if you’re using it. When the sausage is brown, pull it out but leave the sausage flavors in the pan. You’ll want those later.

Now you can prep your lentils which isn’t much more activity than putting them in a strainer and picking through them for small stones. I don’t know how this is an unwritten rule for all lentils and beans, but it is. I guess there are a lot more rocks in things than I thought. 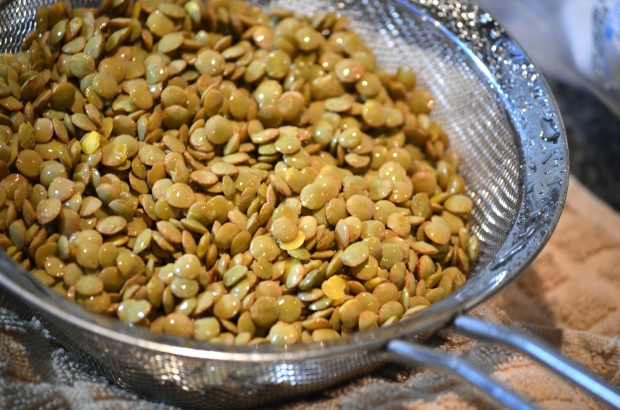 You’ll cook those in a small sauce pan with a couple cups of boiling chicken stock and a couple cups of water for about 25-30 minutes until they’re tender. Then you’ll drain them, saving some of the cooking liquid if you think about it. It’s not really necessary because you can always save some of the pasta water to loosen up the finished product which you should always ALWAYS do. I don’t make any pasta without grabbing a Pyrex measuring cup and scooping out a cup of boiling, starchy pasta water in case I need it.

Now onto kale prep. Tear the leaves away from the stems and drop into a large stock pot of boiling water for 5-7 minutes until they begin to tenderize. 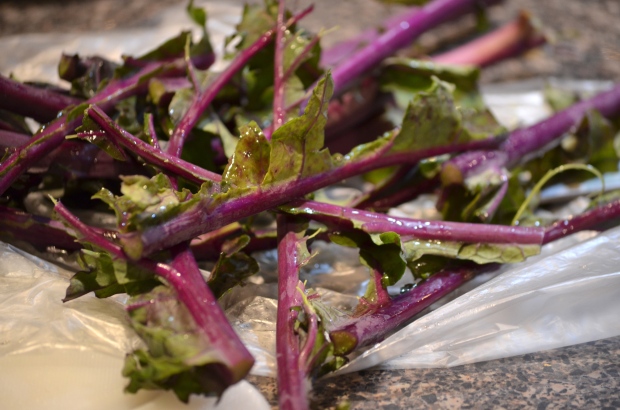 Pull the kale out with a spatula while reserving the water for cooking the pasta. Somewhere around this time, my stove looked like this (don’t be alarmed):

Eventually, when everything was prepped, it then resembled this:

Better, right? The good news is that most of this can be done well in advance of throwing it all together at the end. You can also do some shortcuts like leaving out the sausage and just sautéing the onions in the final large skillet rather than caramelizing them if you so choose.

At this point, it’s time to finish up. Drop your pasta (and I used bowties but think that orecchiette would be great too) and heat your large saucepan with the sausage goodness back up. Add in the sausage, onions, lentils, kale, red pepper flakes and about 1/2 cup of the lentil cooking liquid and heat through. Don’t forget to grab some pasta water too! 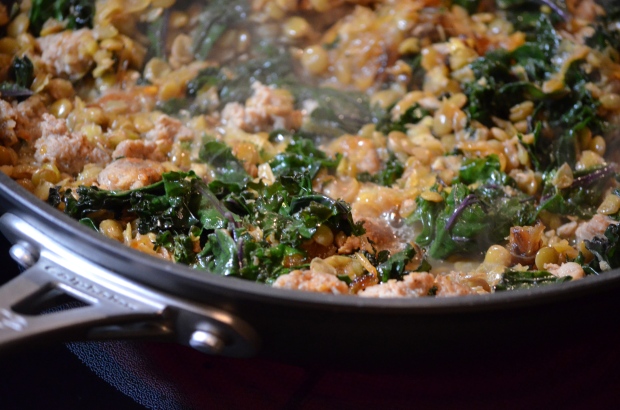 When your pasta is al dente, drain and dump in the pan along with the above tastitude. To loosen things up a bit add in another 1/4 – 1/2 cup of pasta water and heat everything through.

Dish that puppy up and top with parmesan and serve.

I really can’t imagine a better way to eat kale. I’m off to discover a recipe for pasta with broccoli too. Tomatoes are great but there’s an entire world of vegetables that I have been neglecting when it comes to pasta and it’s time to put a stop to it.

One thought on “Eat Mor(e) Kale (or Chikin) {pasta with sausage, lentils and kale}”