Ok, so I’m not Italian. I’m not really much of anything – very mutt-like, indeed. As with most white folks I run across, I’ve been told I’m Scotch-Irish. As far as I know, there isn’t much of a tradition of passing down generations of home-cooked secrets from mother to daughter in this particular culture – maybe it was the whole famine thing. I definitely identify with being southern first and foremost and then I suppose brown-haired,  football-fan, Gemini and somewhere at the bottom of this list, Scotch-Irish.

So, I guess I shouldn’t feel as guilty as I do about what’s about to transpire, but, hey, I do. Since I’m not Italian, I guess technically it isn’t sacrilegious to say this, but it still feels bad: I’ve been cheating on my mother with Tyler Florence.

I haven’t left her for T. Flo, it’s more of an open relationship right now. You see, we grew up eating a particular breed of spaghetti sauce and I’ve recently found a Bolognese that is super delicious and that we tend to make instead of mom’s. To be honest, they’re completely different – apples and oranges, really, but at the same time, it feels so dirty.

I need some accomplices. Let’s do this:

This recipe is good but the beginning of it is really weird. I have nothing to compare it to because I’ve never really looked, but it seemed odd to puree a bunch of vegetables and bacon. And it is odd, but it works.

So, first off, you need to reconstitute the dried porcinis in boiling water for about 20 minutes. When they’re done, you’ll add them to the cuisinart with…

…add the chopped carrots, celery, onion, garlic, bacon and porcinis to your food processor and blend.

I told you it was weird. Grab your big dutch oven and put it on the stove with a couple tablespoons of olive oil, the bay leaves and rosemary. Heat over medium high and once the oil and herbs are fragrant, add the pureed meat/vegetable concoction and cook for about 5-10 minutes. 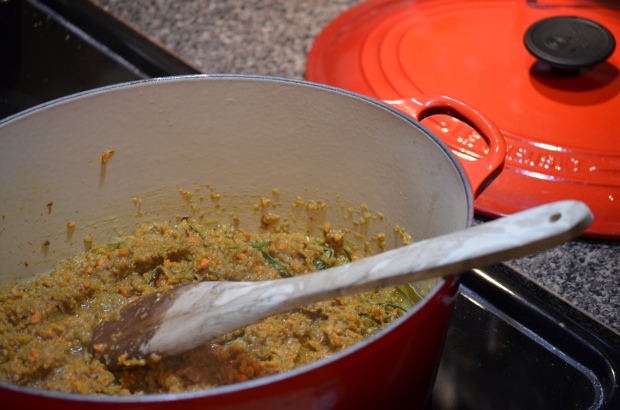 Jack the heat up a bit higher and add the ground pork and ground beef and cook until they’re fully browned through. Break up the lumps and then add the milk. Cook until the milk has almost evaporated – about 10 minutes. Then add the wine and tomatoes and season with salt and pepper. Bring the sauce to a boil and then take down to a simmer for at least 2 hours – but probably more like 4.

This can be pretty fatty, so you’ll want to skim the nasty off the top.

Once things start looking familiar, boil up some tagliatelle, bucatini or whatever noodle you have handy and go to town. 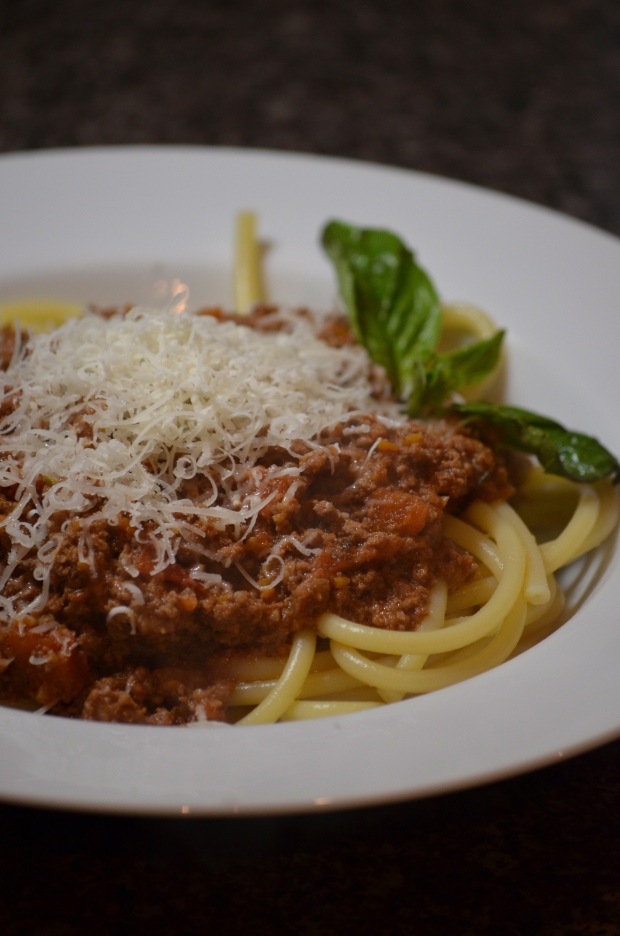 If I could, I would serve this to my mom. I bet even she’d like it.