Me and shrimps didn’t used to get along.  For a long time, the only interaction I had with them was trying to hook them live in order to end up with a larger, more appealing fish on the other end of the line. (Reminds me of a song…) They’re ugly, bug-like and hard to hook – especially if you’ve managed to keep them alive from Jerry’s Bait & Tackle all the way down to the boat and out to sea. They swim around, darting from one end of your live well to the other, waiting for the perfect moment to flip out and stab you with their sharp little built-in shivs.

As a child, I wouldn’t eat fish (just catch it) but eventually I got over that and as evidenced by many recipes on this blog, I enjoy fish quite often today.  Shrimp, or skrimpses, as I like to call them, were one of my gateway crustaceans as I made my way back to eating the fruits of the sea on a regular basis.  I enjoyed peel and eat shrimp and a cold beer whether taken at Posey’s at St. Marks pre-Dennis or at Six Feet Under overlooking Oakland Cemetery. I didn’t cook shrimp at home that often, though. Until last year.

I took it upon my household to singlehandedly attempt to sustain the gulf shrimp business following the great BP debacle of 2010. The gulf was such an important part of my life growing up and part of me has always dreamed of checking out and opening a bait shop-slash-oyster bar halfway between Sopchoppy and nowhere. In order to ensure that my dream of shrimping and serving would be there one day should I actually become detached and end up living in a lean-to in the Panhandle, I thought we needed to do our part and buy as much gulf shrimp as we could. Which meant finding good shrimp recipes so we weren’t always peeling, eating and repeating.

My two favorites so far have been grilled shrimp tacos and this particular recipe from “Cooking Up A Storm” – a compilation of recipes from the Times-Picayune that were lost in Katrina and recompiled in the months following, given to me by one of my favorite co-conspirators, Barbara. These shrimp are great for dinner served over hot rice with a bit of bread for sopping and a salad to cool things off or as an appetizer free-for-all. As the name indicates, they are spicy and that’s part of what makes them so good. If you’re prone to not liking spicy things, you can back off the red peppers a bit, but just be sure not to eliminate them all together.

Get on with it already. This makes 2-3 servings.

Prep your shrimp – i.e. either buy them peeled and deveined or do that at home – before you get a manicure. 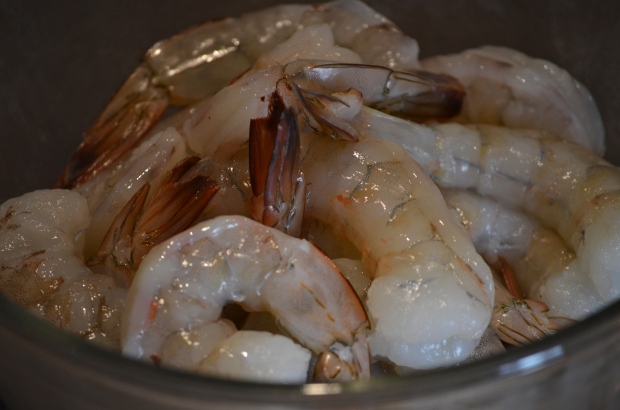 Shrimp doesn’t cook long, so you need to have all the ingredients prepped and ready to go before you get started. Open the beer you plan to use and consume all but 1/4 cup of it. Save that for the shrimp. Dice up your tomatoes, mince your garlic and combine the herbs and spices and put them aside.

Once the butter melts and things start getting aromatherapeutic, add the tomatoes and then the shrimp and cook for two minutes, stirring well.

Add the beer, cover, and cook for another minute (literally one minute – don’t overcook your shrimp).

You’re done.  Serve over some hot brown rice (or not). Crack open another beer and go to town. 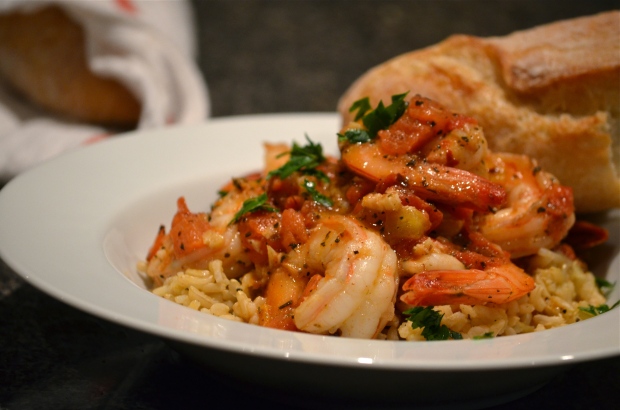