I realize that the word frittata is super ridiculous. There is a macho-bias against egg dishes in general (see: quiche) but seriously, you have to like a frittata. There’s an entire nation that celebrates is cousin, prima tortilla española and is steeped in machismo but alas, we’re just not there.

There’s really not a great way to man-up a frittata without adding a great deal of meat to it, which I do not do because it defeats the purpose of having a fine meatless meal that is not only inexpensive but also relatively healthy. I suppose you could serve it with a stein of beer and a viking helmet but rather than all that, I just mention “tatas” and tend to get a reaction.

All you need to have around to make this happen are some eggs, some vegetables and some cheeses.  An oven and a pan are also helpful but if you’re just now thinking of that, I suggest that you head out and pick up dinner. After several years of trial and error, I think I’ve nailed the best way to do this (personally) and will now enlighten you with my expertise. Speaking of ovens, preheat yours to 400°. 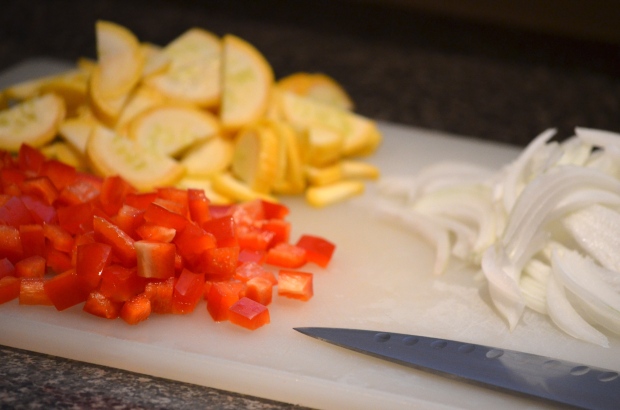 I start with an onion, a red pepper, a squash or zucchini and a couple of red potatoes. Everything gets par cooked in one way or another before assembly. First, boil your potatoes until they’re almost tender (but not fully cooked because you’ll be cooking them some more shortly) and while that’s going down, chop up your chosen vegetables. Pull your taters out of the water and slice them up and throw all your veggies into a 12″ skillet that you’ve heated up over medium-high heat and added some olive oil to. Give ’em a quick sauté – say about 7-8 minutes.

Now, let’s talk cheeses. I like all of them. I’m pro-cheese, VERY pro-cheese. In fact, I once tried to steal an entire cheese sculpture from a wedding. We have a motto in our house, “more is more,” and this certainly applies to cheese. I generally put a good melting cheese or two on top of the frittata (Monterey jack or fontina comes to mind) and occasionally a sharper, more piquant cheese inside (say a goat cheese or even a blue if you’re feeling frisky). Use whatever cheese suits your lifestyle. Have some grated and ready to go though for assembly time.

As an aside, the word piquant always reminds me of the scene in “A Christmas Story” when Ralphie is having his mouth washed out with soap and he’s describing the various tastes of different brands: “Over the years I got to be quite a connoisseur of soap. Though my personal preference was for Lux, I found that Palmolive had a nice, piquant after-dinner flavor – heavy, but with a touch of mellow smoothness. Life Buoy, on the other hand… YECCHH!”

Back to the recipe, lady.

So, while your veggies are cooking in the pan, go ahead and get cracking on the eggs (get it? cracking? ha! you’re welcome!). For one 12″ frittata which serves 3-4, I generally use 4 eggs and 2 egg whites. Whisk those up in a large bowl and when your vegetables are done, dump them into the bowl with the eggs. Don’t forget to season everything with salt and pepper throughout this process. It will look like snot-soup-vegetables (or like this):

If you’re using goat cheese or some other cheese (ooh, Parmesan is good too) inside the frittata, add it now. I tend to err on the less cheese inside the frittata rule so it doesn’t have trouble coming together in the pan (but plenty on top, mind you). Wipe out the pan that the vegetables were just in and add a bit of new olive oil if you need it and put it back on a medium to medium-high burner. Dump the egg mixture back into the pan and start making like you’re scrambling eggs for about a minute, then let it begin to firm up a bit. While that’s happening, run a spatula around the edge of the egg mixture inside the pan to begin to teach it that letting go is natural. Sprinkle your melty cheese on top and put the whole mess inside your preheated oven.

Your tata should cook for about 20-25 minutes until the top is golden brown and bubbly. Once that happens, pull it out of the oven and figure a way to get it out of your pan. I usually just work with the spatula and some crafty wrist-work and it ends up in one piece on a cutting board in my kitchen. 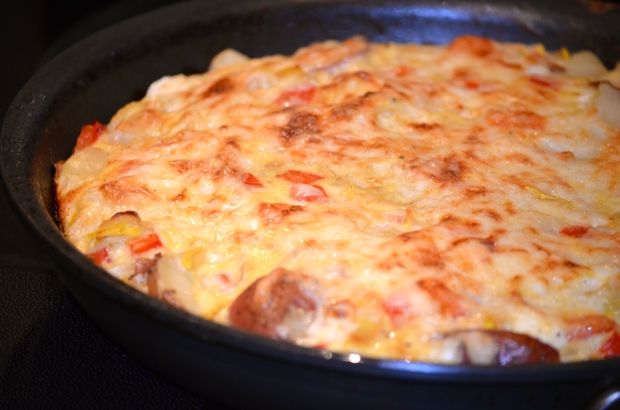 I serve this on the night of with a salad and some bread. The next day, though, I create what I will serve on the daily when I open a diner – a frittata sandwich. Trust me, a slice of this between two pieces of toast is super delicious. 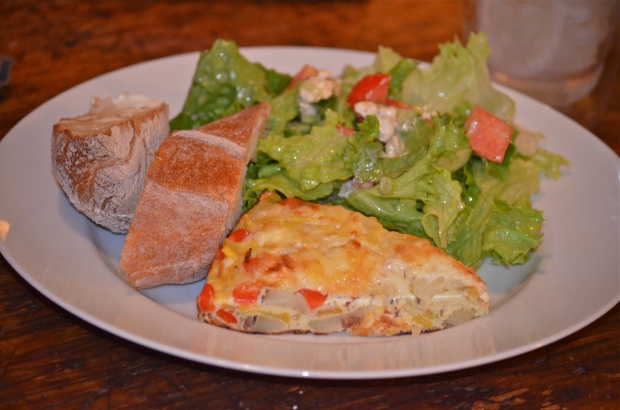 ← This is Top Chef, not Top Scallops {seared scallops}
The Benefits of Prison {skillet chicken with olives} →