I know I know, all of my posts start this way… “I remember the first time I…” But it’s true. I have a lot of food memories. In fact, I think they’re a lot stronger than many of my other memories (or forgetties, I guess, considering that they’re null). So this post starts that way too.

I remember the first time I (wait for it) heard about quinoa. Or, as I liked to say, “kwen-oh-ah”. 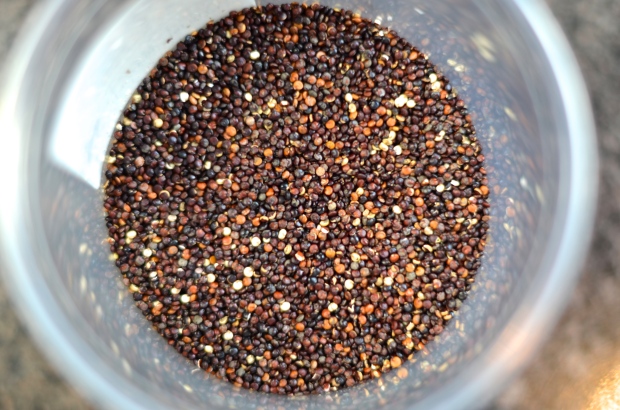 Considering that I do not come from a family of vegetarians or Peruvians (or Peruvian vegetarians), quinoa was a word that I had never heard of or even attempted to spell. Evidently it’s been around a long time (see: Incas) but for some reason it flew right under my radar until about 2006. One of my new Paris friends was a former vegetarian who still feigned herbivorousness around her parents. As with most vegetarians, the entirety of their time was spent trying to find ways to ingest proteins without killing anything and as such, they had a much stronger relationship to ancient grains than I. Cue my intro to quinoa.

Since then, like most things Peruvian, quinoa seems to be very popular and rightfully so. It’s sort of awesome. It’s versatile. It’s high in protein and fiber. It can be interesting looking and, unlike most small grains and pastas (Israeli couscous, orzo), it’s small enough that I don’t choke on it every third bite.

Because of its proteinitude, it’s a great thing to keep on hand. I try to cook a vegetarian meal at least once a week but usually we end up eating meat-free even more. I found a recipe for a quinoa bake in an issue of Cooking Light and, as I am wont to do with recipes from that magazine, I decided to fatten it up and try it at home. This can be a side or a whole meal, depending on the agreeableness of whom you’re trying to feed. This has a lot of ingredients. Feel free to limit them as you see fit.

That’s a lot of stuff, I know. I don’t generally like to cook with that many things unless they’re sweet and going into a cake but this is worth it. Start off by preheating your oven to 375°F and grabbing a large skillet. Cook the quinoa according to the package and if you buy it in bulk, just cook it like you would pasta (which I’m sure is wrong but it’s how I do it), for about 15-20 minutes until it begins to “sprout”. Set it aside. Chop your onion, bell pepper, zucchini and slice your tomatoes.

Heat some olive oil in a large skillet and saute your vegetables until they just begin to tenderize. You’ll be baking them too, so don’t get them too soft. Add the garlic and cook for about a minute. In a large bowl, combine the cooked quinoa and sautéed veggies. While you’re at it, toss the herbs (saving a bit of basil for a topping at the end), beaten eggs, milk, cheeses and some salt and pepper in there too. Stir to combine.

See the little squigglies that have burst forth from the quinoa? That’s when you know it’s cooked. Aren’t they charming?

While this isn’t necessary, I decided to roast the tomatoes for about 20 minutes before putting them in the dish. I thought this might keep them from being overly watery (which they really aren’t, my husband just has a watery-food-phobia) and would add a bit of extra punch (which it did). This is completely optional and slightly ridiculous. Do it if you want. Or not.

Let’s assemble. Grab a large baking dish and spray it with cooking spray. Pour the quinoa mixture up in there.

Layer the (roasted) tomatoes over the top.

Remember the bread? Either toss it in a mini-prep and process it until you have medium-sized pieces or tear it apart on your own. Sprinkle over the whole thing and bake for 40 minutes or until the top has browned. Add the remaining fresh basil on top for flavor/color (my two favorite reasons for anything). 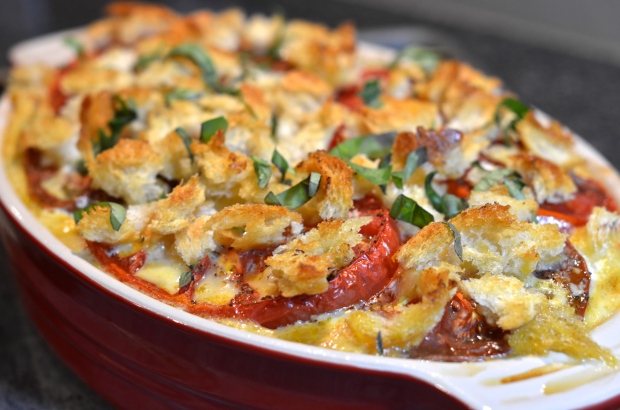 Let this puppy cool and serve it up. It keeps in the fridge and reheats in the microwave or oven really well. This also feeds a large number of people, like a water polo team and their coach (approximately 8 people).